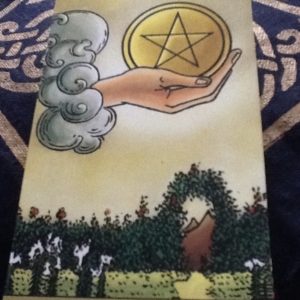 We all know the cliché image of a fortune teller, often in Gypsy garb, turning up cards to predict someone’s future. Many a movie plot is hung on such a scene. For people unfamiliar with the Tarot, this is the image that likely first comes to mind when it is mentioned.

I have come to think of the Tarot in a different way. I think of it as a practice which allows me to bring to the surface issues and ideas that are significant in my life, but may be hidden from my conscious thoughts.

I won’t go into further detail on that at the moment, because I think it’s important first to approach the question posed in the title of this essay. Attempting to predict the future is considered by many to be equivalent to conjuring demons, and by many others to be firmly in the realm of charlatans, the ignorant, the foolish and the superstitious. So its reputation as a vehicle for fortune telling casts a shadow of suspicion on the Tarot. Before we can discuss other uses of the cards at any length, it seems to me that we ought to answer this basic and fundamental question. Can the Tarot be used to predict the future?

First, let me ask a rhetorical question. If you see your child with a shoe untied, and you warn them that they had better tie their shoe, or else they will trip and fall – and they don’t tie the shoe, and they do trip and fall – did you predict the future? Obviously, literally, you did.

More precisely, you observed a set of circumstances, and noticed that a particular outcome was possible (or maybe even likely). There was nothing unnatural or abnormal about this. In fact, most of us do it all of the time. Each time we get in a car, and choose the route to a destination, we’re doing our best to predict the future. Should I avoid 5th Avenue because there may be a train at the crossing this time of day that will delay my arrival? Do I have time to stop for a cup of coffee, or will that make me late to work? How long is the line at the Starbucks drive through? Should I be especially attentive to my driving along this stretch of road, since it’s known for speed traps?

We’re constantly using what we remember and what we observe to make decisions in order to predict (or perhaps to create) the outcomes that we desire. Whether it’s a trip to the grocery store, or retirement planning, this sort of activity is such a fundamental part of our normal, everyday lives that we scarcely even notice it.

Let me ask another rhetorical question. If there was a way to obtain additional information that might be relevant to the question at hand, would that change the essential nature of this process of predicting the future? Let’s say that you could add a radio traffic report to the mix during your morning commute, or a GPS device. Would there be anything fundamentally different about the way the process works? Anything weird or spooky or paranormal about the increased accuracy of your predictions then? Of course not. You’re just expanding your view, and making use of information to which you didn’t have access before.

So here’s one final rhetorical question. What sort of information might a deck of cards offer that could possibly assist in this process? Since we’ve already established that we do, indeed, literally (and almost effortlessly) predict the future with varying degrees of accuracy every day, the key to the question at the top of this essay is whether or not the Tarot can reliably add any valuable information to the process.

I suspect that it can.

Remember our cliché Gypsy, telling fortunes in a tent or a creepy shack? Here’s what’s wrong with that picture. It gives the impression that the information we seek belongs to a realm that is apart from the natural world, and apart from us. In fact, the information that we can access through the Tarot, although “extraordinary” in a sense, isn’t unnatural or unusual at all. It’s just information that most of us are unaware of or tend to ignore much of the time.

If you’ve ever had the experience of misplacing an item, looking all over for it in frustration, finally giving up, relaxing about it, and then walking into another room and immediately finding it right there in an obvious place, then you know precisely what it is like to gain insight from the Tarot. Your unconscious mind knew all along where that misplaced item was. After all, you’re the one who placed it there! The knowledge of where you had put the item was with you all of the time. You were just temporarily unable to bring that knowledge to your conscious mind. The harder you tried to remember, and to retrace your steps, the more inaccessible the information became. Once you gave up, relaxed, and your unconscious mind was able to work without interferance, it led you right to the misplaced object.

In the same way, the images and traditions of the Tarot, like so many other such systems from cultures the world over, offer an opportunity to delve into information that is waiting there for us in our unconscious minds. The information isn’t unnatural or apart from us. It doesn’t come from demons or ghosts or the Gypsy. It’s right there inside of us all the time. It’s just that as we go about our ordinary lives, most of us don’t take the time to explore the tools that can help to bring this information to bear on our conscious thoughts and decisions.

Just how it is that the Tarot works to help us access the thoughts and patterns of the unconscious mind is a subject for another article, perhaps. For now, I’ll only say that I have found that it does so in my own experience.

There is also the notion put forth by Carl Jung that there exists a vast “collective unconscious” where unconscious minds of all times and locations meet in some way. It’s certainly interesting to consider the storehouse of knowledge and experience that might be waiting should such a notion be true.

Before we close, I’d like to add one other note about our Gypsy friend. I want to make it clear that I don’t mean to denigrate her, or the many brilliantly skilled real life practitioners of the art of interpreting the Tarot. There are legions of Tarot readers who are gifted, serious, and dedicated to helping others plumb the depths of special knowledge that awaits in the psyche. You’re more likely to find one of these marvelous people at a table in your publc library than in that shack at the edge of town these days though.

So, can the Tarot predict the future? Maybe not like in that movie scene where the Gypsy turns up the Tower card, there’s a dramatic music crescendo, and then a cut to a burning building. But if we accept that we routinely use information available to us to “predict the future,” and also accept that the Tarot can help us uncover another source of useful information, then I believe we have our answer.

What do you think?

This essay was originally published on The Daily Dispatch weblog.