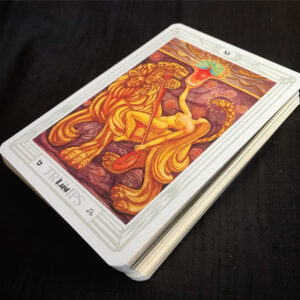 The Whore and the Holy Grail

Thoth Atu XI is a good example of what makes the deck so unique.

First, Lady Harris’ art is almost terrifying in its beauty on this one, and it depicts the subject (Lust) about as well as it can be depicted. The figure riding the beast first arouses and then controls.

Second, this is one of several of the Major Arcana which Crowley has renamed (from Strength in the traditional decks). He has also swapped this card’s position with that of Atu VIII (Adjustment – which was also renamed from Temperance in older decks). His reasons for the change in position are too much to go into here, but they have to do with several cards’ relationships with the Hebrew alphabet and the Zodiac. If you’d like the full story on this, please refer to DuQuette’s book about the deck.

Third, it is a prime example of how Crowley uses concepts, language or images that might be considered profane or blasphemous to express important ideas about spirituality.  Instead of the Holy Virgin, bearing the Light of God into the world, here we have the Whore of Babylon, riding the seven-headed beast (angel, saint, poet, warrior, adulteress, satyr and lion/serpent). The Whore represents universal receptivity, seducing each soul back to the light. She lifts high the Holy Grail, representing both love and death. Again, I’m not doing this point justice, so please refer to DuQuette or directly to Crowley’s Book of Thoth for more.

When Lady Harris exhibited her art for the deck, and a child asked what this picture was about, she explained that it is meant to depict the feeling of seeing some nice chocolates, and wanting them, and eating them, and they’re good. This seems to me a perfect analogy for the subject matter.