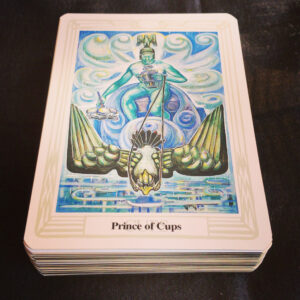 The Thoth Prince of Cups reminds me of the Indian deity Rudra, the fierce king of storms, as described here in the New World Encylopedia.

Rudra is also notable for his unpredictability. Prescribed courses of actions do not always satisfy him, for he is not easily pleased. Even a minor transgression by one of his most faithful devotees can send him into a tempestuous rage. Rudra’s temperament seems to be an anthropomorphic representation of nature’s most ruthless forces, such as lightning, wind and forest fires.

In the Thoth system, this card represents “air of water” or the volatile aspects of the suit of emotions. It can be conceptualized as the energy of steam.

This Prince comes riding in on a massive wave. Wham. Bam. Thanks. On his way again.

You can read my earlier post about this card at the following link.