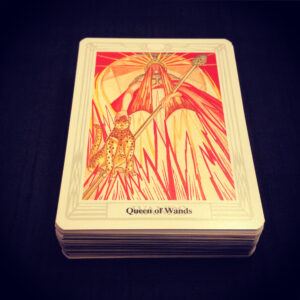 The Queen of Wands in the Thoth deck represents “water of fire” – the flowing, fluid aspects of the element.

One of the titles of this card is “Queen of Salamanders.” Salamanders were reputed to be able to extinguish fire, or stand in it unharmed. They share the trait of a spotted visage with the leopard depicted on the card. The leopard sits tamely under hand, at least for the moment.

This Queen’s scepter is topped with a pine cone, which has long represented the pineal gland, which regulates sleep, body temperature, hunger, thirst and more. The ancients associated this gland with the Third Eye, and believed that it is the gateway to states of higher consciousness.

Hot passion, sharp wit, flirtatiousness, charisma and a deep thirst for self-knowledge are all traits of this character. When this card turns up, she bids us to emulate her fiery, charming ways.

When “ill dignified” (Crowley’s term) she can be capricious, vindictive, vain, snobbish, brooding and prone to jealousy. She must be obeyed, and must be perpetually at the center of attention. So this card may also turn up as a warning. It is then advisable to scan ourselves and the environment for any of these characteristics.

Fire is a great benefactor, but also a force of great destruction when raging out of control. May our passions be strong, and may they be well tended.