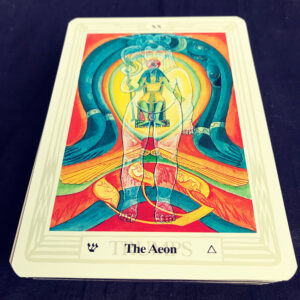 The Age of Horus

One of the more noticeable and interesting features of the Thoth deck’s Major Arcana is the establishment of the Aeon card as Key XX in place of the Judgment card. I’ll do my best to offer a quick summary of Crowley’s reasons for doing so, but if you would like a better understanding of the matter, you would do well to take a look at Lon Milo DuQuette’s excellent study Understanding Aleister Crowley’s Thoth Tarot.

In short, Crowley dispensed with the Final Judgment, because he believed that the “end of the age” prophesied in Christian scriptures had already come. He saw the ages (or “aeons”) of human existence as the Age of Isis, the Age of Osiris, and the current Age of Horus (which he believed had commenced in 1904). Crowley believed this New Aeon to be the age of human liberation. We are light. We are love. “Every man and every woman is a star.”

One of the most beautifully colored and lyrical of Lady Harris’ paintings, The Aeon depicts Horus in the center, with the Egyptian Sky Goddess Nuit arching over him, and Horus’ twin brother, Hoor-pa-kraat, in opaque superimposition to the front.

– The Book of Thoth

This card is the fifth Trump to turn up this week, and the fourth in a row. Big, karmic energy is afoot.