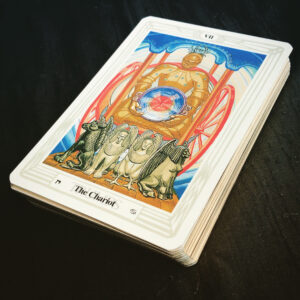 Bearer of the Light

The Chariot in the Thoth deck has a specific role to play in the alchemical story told by the deck’s major cards. I won’t go into further detail here, except to note that he is carrying the Holy Grail. 🙂

I like the idea of this card as a herald. A new force comes into the picture, and melts the old forms.

May the reformation commence.