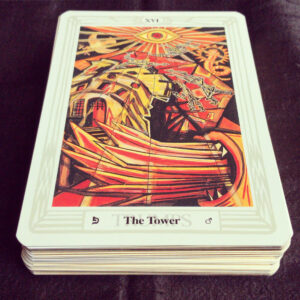 The Tower is the one card in the deck that has always filled me with outright terror. The first time it turned up in a Daily Draw it nearly sent me into panic. I was supposed to be on the road that day and almost cancelled my travel plans.

Even the other “dark” cards in the deck, the Devil, Death, the Ten of Swords – none of them filled me with dread as did the Tower.

Although I have learned to rationalize and get over my fear somewhat during the course of the last two years, particularly in Daily Draws (where I think of the appearance of the card as heralding a sudden release of energy), even this morning I greeted the card with a little trepidation.

Then I read this, from Crowley.

Break down the fortress of thine Individual Self, that thy Truth may spring free from the ruins.

DuQuette helped me to focus on Lady Harris’ depiction of the Eye of Shiva at the top of the card. It also makes sense that this card turned up on a morning where I have been studying the Spiritual Eye in the teachings of Yogananda Paramahansa.

This version of the card doesn’t portray lightening from the sky striking us down. It is the creative destruction that we ourselves must undertake, by the Grace of the Lord, in order to disabuse ourselves of the illusion that we call material reality, and to come to the realization that All is One.

“If thine eye be single, thy whole body shall be full of light.”

Tear down the fortress and let Love rule.