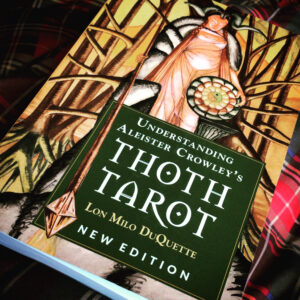 I had been hesitant to take more than a casual glance at the Thoth Tarot, for several reasons.

Firstly, I already had plenty to do learning the RWS (and then the Tarot de Marseilles). Until I had those decks more or less under hand, I felt no need to move on to another system.

Secondly, the Thoth Tarot is extremely dense and subtle. To even begin to understand its complexities, let alone do it justice as a reader, one needs to understand at least a little bit about numerology, a little bit about ancient astrology, a little bit about mythology and ancient religions, and quite a bit about the Tree of Life and other teachings of the Kabbalah. In short, a fair depth of knowledge and understanding about what might be termed the “Western Mystery” tradition is required if one wants to do more than stumble around intuitively with this deck. When I began my Tarot journey two years ago I had neither the time nor the interest to devote to such an undertaking.

Finally, let’s just say it. This is Crowley’s deck, and I have to be honest that this was off-putting and even somewhat frightening to me.

Over the past couple weeks, I seemed to find myself running across mentions of the Thoth deck from others in the online Tarot community more frequently. I did my best to just scroll on by, but occasionally I would catch a glimpse of one of the cards from the deck, and it would stop me in my tracks. The stunning originality and modern sensibilities of the artwork were, at last, too intriguing to keep scrolling past.

I did some research before making the decision to begin study of the system. I learned that not only is the Thoth deck one of the three major Tarot decks currently in use, but that it actually surpasses the Tarot de Marseilles in popularity among professional readers. It is second only to the Rider-Waite-Smith decks (and their offspring) amongst the pros. I also learned about the fascinating history of the deck. How Lady Frieda Harris provided a stipend to Crowley when he was destitute, on the condition that he “teach her magic” – and used the relationship of tutelage to prod him forward toward development of the Thoth Tarot. How neither of them lived to see the publication of an actual deck of cards based on her images. How much of the content for the deck can be traced back to Crowley’s experiences with the initiation rites of the Hermetic Order of the Golden Dawn.

But what about Crowley?

I also, almost incidentally, learned some things about Crowley. I won’t try to defend his well documented tendency to leave a permanent trail of rubble and broken lives in his wake, pretty much throughout his 72 years on the planet. He was, by most accounts, a thoroughly despicable character, and perhaps even deserved the title “wickedest man in the world” as conferred on him by the British papers of the day, and welcomed (some would say relished) by Crowley himself.

Yet, as is usually the case with genius, the man was more complex than many among us would like to see. Had he been a cruel, blasphemous, sex-crazed captain of industry rather than a cruel, blasphemous, sex-crazed  wastrel occultist, I suspect that he would be widely revered, his many excesses excused, and his life and methods studied by Wharton MBA candidates. Had he not been so determined to piss on polite society and its mores at every opportunity, what might have been? But, of course, then he wouldn’t have been Crowley.

Here’s the other thing. Even if Crowley was the evil, demonic monster that he has been made out to be, are we to live in fear that he could somehow, in a meaningful way, impart that evil to the artwork printed on little pieces of cardboard nearly three-quarters of a century after his death? My own guess is that if we see any darkness in these cards, we are calling that darkness forth from somewhere within ourselves. If there is anything dangerous in them, it could only be dangerous ideas. Surely we can use our minds and a little discernment.

A Good Place to Start

So, I find myself working my way through Lon Milo DuQuette’s excellent New Edition of Understanding Aleister Crowley’s Thoth Tarot. Thus far, it has been captivating.

I’ve yet to receive my Gold Edition Thoth deck, which, for some odd reason, has to come here to the U.S. from Germany via Australian Post. I am in no hurry, though. I hope to learn at least enough from the DuQuette book in the mean time to feel less embarrassed and overwhelmed at first shuffle.

It may be quite some time yet before I will feel comfortable using the Thoth for readings, but you might expect to see it showing up in my daily draws in the next few weeks.

I would love to hear from other practitioners concerning their experiences, thoughts and resources related to this deck. Also, any other perspective about Crowley would be much appreciated.

For now, I leave you with one of his more famous (and perhaps least offensive) utterances. “Love is the law, love under will.”