What is the Tarot? 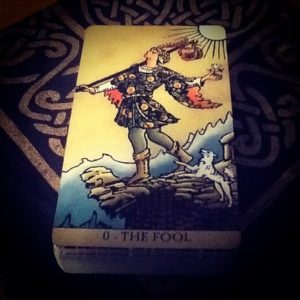 The Tarot is a collection of 78 cards, divided into two categories, the Major Arcana and the Minor Arcana. The word “arcana” simply means a secret, a mystery or something that is hidden. In the context of the Tarot, it refers to the meanings that have been attached to the cards over the years, or perhaps the ideas that the cards sometimes bring to light.

These groups of cards were first referred to as “arcana” by Jean-Baptiste Pitois, a 19th century occultist and author. All sorts of theories have been proposed since his time concerning the origins of the cards. Some ascribed the cards to various mystical cults of ancient societies, claiming that the images were used to hide the wisdom of the ages in plain sight. As nearly as we can tell, though, the Tarot originated as a parlor game, similar to bridge, some time in the 1400s in Europe. In the late 1800s it emerged as a tool for divination and other occult purposes.

The Major (or Greater) Arcana

The Major cards depict the great archetypes of humanity. These cards are numbered one through twenty-one, plus the zero card (The Fool) for a total of 22. The survey through cards one to twenty-one is sometimes called the “fool’s journey.” It tells the story of the human experience, with all its victories and tragedies, the mundane and the magic, the love and the loss. The images on the cards would have been familiar to most people who lived in Europe during the Renaissance.

When Tarot cards were still used in gaming, the cards that comprise the Major Arcana would have been “trumps” (cards of triumph). In Tarot readings, these greater cards convey more gravitas or significance than the cards of the rest of the deck. They represent the major events and issues in one’s life, while the Minors are thought to deal with more fleeting or perhaps mundane issues.

Here is a list of the cards of the Major Arcana.

The Minor (or Lesser) Arcana

The 56 Minor cards are made up of four suits of 14 cards each. The minors are quite similar to a typical playing card deck that we use today, but with the addition of one extra court card per suit. The suits are Wands (corresponding to Clubs), Cups (Hearts), Swords (Spades) and Pentacles or Coins (Diamonds). Each suit numbers one through ten, plus the four court cards of Page, Knight, Queen and King.

The suits of the Minor Arcana are rich in symbolism, with each suit corresponding to an element, a season, and other aspects of nature and the human experience.

Over the years, associations and meanings have been attached to the cards, though the meanings vary widely depending on the reader or the system or reference that one is using. So there is certainly a “tradition” of meanings for most of the cards, but there is no single “correct” interpretation for them. Interpretations vary widely from one source to another, and are also dependent on the context of a particular individual reading.

There are lots of resources online describing the meanings of each card, and countless books on the subject as well (here are a few of my favorites).

Learning the Tarot : A Tarot Book for Beginners by Joan Bunning

Seventy-Eight Degrees of Wisdom: A Tarot Journey to Self-Awareness by Rachel Pollack

The Essential Tarot: Unlocking the Mystery by Vincent Pitisci

Most Tarot decks also come with a “Little White Book” listing some ideas for interpretation of the cards.

The way many of us use the cards, though, is to pay more attention to the impression that one gets by actually looking at the card than to a definition or interpretation listed in a book. What sorts of thoughts or feelings does a card evoke in you? Does it jar any memories or strong emotions? Does whatever is depicted on the card seem to have any relevance to your life or to the question being pursued?

How do the cards work?

I’ve found Tarot cards to be an excellent tool for personal development and creative problem solving. They can be especially useful in drawing out information that is hidden away in our minds, generally out of conscious reach. Human beings are adept at looking for patterns and associations. This is something that we may do consciously at times, but it’s also something that most of us do intuitively and unconsciously (constantly) without even realizing it. So when we are presented with an evocative, randomly generated image, our mind searches for its meaning. And it’s often surprising what rises to the surface in such moments. This, I think, is the power of the Tarot.

There are those, of course, who believe that the cards bring us messages from spirits or powers beyond our ken. I won’t argue that point one way or another. It’s enough for me to know that the cards have helped me delve into my own spirit, better understand myself, and unlock mysteries tucked away in my own mind.

How does someone get started learning the Tarot?

There are so many ideas and systems and resources out there. I think the simplest way to start is to get your hands on a deck, draw a card a day, and keep a journal of what card you draw, how you feel about it and what you learn about it. Here’s a post with some more detailed suggestions on how to get started (including what deck to start with).

Because of the way that the cards have been used in occult practices, some people do consider them evil, or dangerous, and may even be frightened by them. My own church teaches against the use of cards to “unveil the future” as this practice is thought to betray a lack of trust in God.

You’ve probably heard stories (as have I) of people who had strange or unpleasant things happen in their lives when they began using a Tarot deck.

If you’re hesitant or afraid, then by all means listen to the voice in your heart that tells you the Tarot may not be for you, at least for now.

I can tell you that in my own life, the cards (even the scary ones) have had only a positive impact, and profoundly so. In fact, the Death card, with its representation of an irreversible transition, was what prompted me to quit drinking alcohol after forty years of heavy, daily imbibing. That may not be a miracle, but it’s certainly a wonder.

Moreover, the way that I use the cards, and the way I recommend that others use them, isn’t about “divination” or communing with spirits or devil worship or anything of the kind. It’s simply a way of presenting an evocative random stimulus to slap your mind upside the head and see what gets knocked loose.

If the prospects of that don’t frighten you, then the Tarot cards shouldn’t either. 🙂

Got questions? Comments? Fire away.