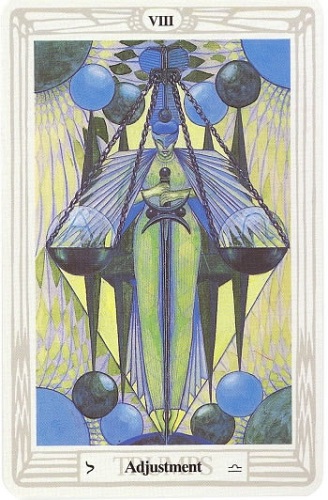 I have been working, almost exclusively, with the Thoth deck for nearly three weeks now and am excited to be figuring out what makes this deck such a powerful tool for self-development. I’ll share a few thoughts here, and would love to hear from others with your own experiences and ideas.

One of the reasons that most of us begin working with the Tarot in the first place is that we want to better understand ourselves, our world, other people, and the relationships between the three. I find consulting the cards to be an excellent method for directing our attention towards information that we might otherwise never encounter in this endeavor. The Thoth deck seems to pretty consistently point to deeper, and more fundamental levels of information than other systems, at least in my experience thus far.

Sliding Along the Surface

When we participate in or observe an event or an interaction, we usually experience it only in an indirect way. Most of what we experience is actually an elaborately disguised expression of an underlying confluence of energies and tendencies and influences.

For example, let’s say we get into an argument. Though it may seem to be a straightforward disagreement about the issue of the moment, in truth it is a meeting of the sum total of everything that both parties have ever witnessed, said, or done, from before either of them were ever born – placed in a specific environment in space at a specific moment in time. This, in turn, is the culmination of everything which has happened, everywhere in the Universe, from the Big Bang to date. And even if we look at it strictly in a linear fashion, we have to add in at least probabilities, if not eventualities, which are in relationship to the present situation, stretching on out into infinity.

This may seem like an almost ridiculously broad statement at first glance. But we have all had the experience of realizing, after such an argument, that we were reacting out of instincts that were rooted in hurts of the past or fears of the future. Or perhaps we’ve apologized to someone saying “I don’t even know why I said that. What got into me? I didn’t mean that at all.”

So we may dig deeper to try to find the reasons for what we do and say, or what another person may do or say, the opinions we hold, and so forth. Ultimately, though, this approach fails us as well. Here’s why.

Even when we are trying our best to understand an event, or another person, or a relationship – most of the time we’re only seeing outward expressions of hidden energies. We are sliding along the surface of things. And we can’t grab ahold of anything, because it isn’t the real thing.

What we experience as material reality is, in fact, an illusion. Things which seem so solid are actually composed of waves of energy. Our world and our bodies (let alone our thoughts and feelings) are vibrations, nothing more. Though they may seem solid and permanent, the physicists tell us that they are not.

What most of us are looking for when we use a tool like the Tarot, are glimpses of information that might otherwise remain hidden. Because of the way that we experience “normal day-to-day reality” we might expect the cards to give us information which is similar to what we usually experience, but that we have merely overlooked. For instance, we might draw the Five of Wands and think “conflict, struggle, scuffle, argument.” By this we might realize that an argument is immanent. This information can certainly be useful, but it still keeps us in the realm of “sliding along the surface.”

What the Thoth deck seems to do exceptionally well is pull back the drapes, so we can glimpse the actual energies and tendencies and influences behind the surfaces. It forces us to look toward what is real, rather than the second-generation expression of it.

Back to our example of the Five of Wands, with the Thoth deck, we learn that the card represents the powerful fiery energy of Leo which is being pent up by the massive gravity of Saturn. Hence, the reason for the strife – passions struggling to break free from their fetters. Suddenly it’s not just “conflict and arguments” but the fundamental and essential energies (both personal and impersonal) which are at play in creating the situation. We can begin to stare directly into the faces of our karmas.

The ability to examine the confluences of energies, rather than just the surface expressions of these energies playing out as personalities and events, is a deeply profound, powerful and exciting area of study.

Have you gotten glimpses behind the veil? Have questions or comments? I’d love to read them. Leave a comment below.