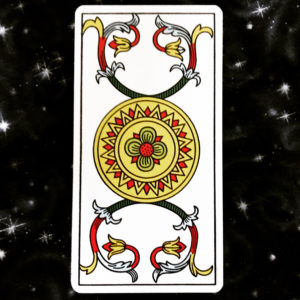 The Ace of Coins represents the seed of manifestation. It denotes potential which has begun to unfold in the material realm.

This could be the start of a new project, an investment, developing an idea, or literally planting a seed. It can also represent someone coming into a sum of money, or obtaining an item of value.

For me, at this time, I think that its message is “stick to the basics.” I have been struggling for some time with questions concerning how to approach political work while keeping a sense of personal balance and well being. I have been a political activist for more than a decade. It often seems that politics is filled with masses of negativity, poised to suck me into their gravity. This isn’t always consistent with a practice aimed at spiritual development and a life focused on good and positivity. By its nature, political work, particularly in our age, involves contention and conflict.

Last evening, after a socialist reading group call, I found myself feeling tense and frustrated. I drew three cards – The Chariot, Seven of Wands and Nine of Wands. The first represents achievement, public acknowledgement and recognition, while the other two are filled with struggle and difficulty. The Nine, especially, has to do with things competing for one’s attention, and the prospect of setting aside or abandoning a project due to conflict. I read this spread to mean that although I have a lot of expertise that I can bring to political work, it is filled with frustrations and unpleasantness for the foreseeable future, and would require vast stores of energy, time and patience. I decided that for now, it’s not healthy for me to devote myself to it.

The Ace of Coins turned up this morning, as if to affirm that this is a good decision. I plan to work “from the inside out” by focusing my time and attention on prayer and meditation for the time being, and confine my outward pursuits to writing and music.

Coming to this decision, and being at peace with it, would likely have happened without the influence of a Tarot deck, but the situation is a good example of how the cards can help to zero in on the core issues surrounding a decision, to organize one’s thoughts and to gain confidence in the validity of one’s choices.