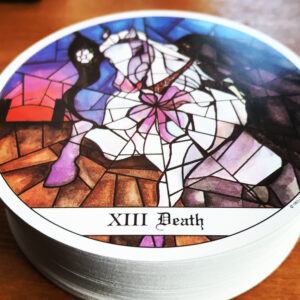 A Change Has Got To Come

Another card from the Majors turned up today, and I have to say that I was less than enthusiastic about it. In fact, as I was preparing to create this post, I thought “I don’t even want to face this.” Since the card is Death, this was at least a little funny.

I have been struggling to relate to this string of Trumps – The Hierophant, The Hermit, The World, the Wheel, Chariot, Lovers, Tower and now Death, with only three Minor cards scattered in their midst. In fact, 14 majors have turned up so far during these 23 days of September, and Death has come around twice, after also appearing in the middle of August.

The thing is that I don’t feel as if anything particularly earth shattering is going on in my life at the moment, or that there is any profound lesson to be learned or aspect of my development that needs attention. I don’t feel that I am either in a rut or in a period of turmoil.

The LWB for the Cloisters deck has this one heralding some sort of major change, though not a physical death. Perhaps there is something on the horizon. I guess that I’ll know when I know.

In the meantime, I will focus on the notion that no matter what sorts of changes come, there is a center of calm and security deep within to which I can retreat and find nourishment and comfort.