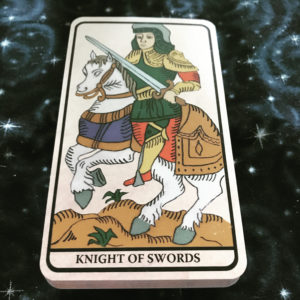 Seize the day (but don’t be a jerk about it).

The Knight of Swords is charging into the fray, sword at the ready. He is poised, prepared and mighty. He represents the power of the mind ready to take action.

This card can be an indication that the time is favorable to act. If an action has been well reasoned, and things are in place to move forward, then do it. Don’t hesitate. Strike now!

The action could be to go ahead with plans that have been under consideration for awhile, or it could be something as simple as sharing an idea or thought.

Here’s where this card gets complicated, though. When it turns up, sometimes it’s a representation that someone is being hasty, or that they aren’t taking another person’s needs or feelings into consideration. So it can be a warning against the same sort of swift action that was just advised above.

What are we to do with such a contradiction?

Discernment is key to interpreting this card. I like to ask myself if this knight’s direct (some would say “blunt”), charge-right-in style is present somewhere in my life at the moment. Am I acting like this knight? Is someone else?

If so, the next question becomes “is this style appropriate to the current situation?” If it is, then onward with all speed. Otherwise, maybe it’s time to consider how a little temperance might be helpful.

If the spirit of this knight is absent at the moment, then it may be time to scan for opportunities to take action, or for circumstances that would benefit from a decisive move. What is being left undone that I could do right now?

When this card turned up this morning, I was in the midst of a contentious discussion with someone that I have known for many years. I took a moment to ask “am I being impulsive and unnecessarily abrasive here?” In this case I realized that I was acting in accordance with my highest values and best self.

Even though the pause to reflect didn’t prompt a change in my approach, it gave me the confidence to proceed knowing that I wouldn’t feel regretful later.