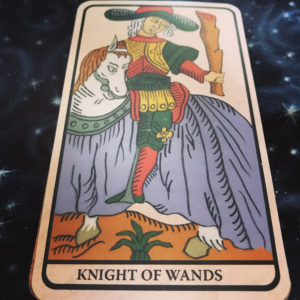 Knights are the cards of action, with each one representing the concept in a slightly different manner. The Knight of Swords charges right in, brandishing his blade. The Knight of Cups leads with his heart, presenting the cup almost as if in a ceremonial procession. The Knight of Pentacles moves in the steady assurance of inevitability. The Knight of Wands is moving forward, but (in the imagery of the Marseille decks) he turns and bids us follow.

My favorite definition of a leader is someone who knows where they should go, and gets up, and goes. They don’t just tell people what they should do, or explain why they should do it. They lead by doing, and their action demonstrates that they, too, have “skin in the game.”

In readings, for me, this card either represents active, charismatic leadership, or suggests that such leadership is needed. It’s a reminder that we’re all a part of something larger than our individual concerns and desires, and that we are dependent upon each other for our well being.

The Knight of Wands says “Come on along, now. We’re all in this together, and we’re not leaving anyone behind.”

Isn’t it a pleasure to follow a leader such as that?