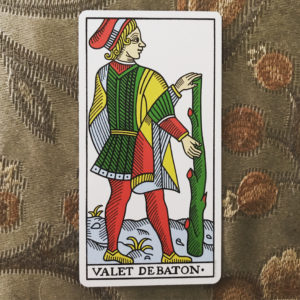 As I wrote earlier about the Page of Wands, this is the card of enthusiasm in new endeavors and creative pursuits.

Some months ago, my wife began a chanting meditation practice. She and several of her friends from the yoga studio did a video on Facebook to share one of the chants, and used recorded music in the background. Once it was posted, the automated copyright sensor removed the audio from the post. So I decided to record the background music myself for her use. I recorded the guitar track first, and then several keyboard parts, and finally her reference vocals.

The track turned out alright, so I created another one in a similar fashion of another song that she uses, adding a bass guitar part. It turned out well. So then I got the notion that I should compose a melody for the Adi Mantra. In the meantime, I began to study Kirtan music, and figure out how to better approximate the harmonium on our Yamaha electronic keyboard. I dragged out an old set of bongos…

And one thing leads to another.

Long and short of it is that we now have aspirations to create an entire library of recorded backgrounds for chanting, using original melodies and our own arrangements. This is not the sort of project that I would have ever considered prior to the changes in my life that have been brought about through the Tarot over this past year.

The Valet de Baton arrives as encouragement to dig back in with vigor.

Do you have a new project of some sort that you’ve been considering, but are hesitating from some reason? Follow that bliss!