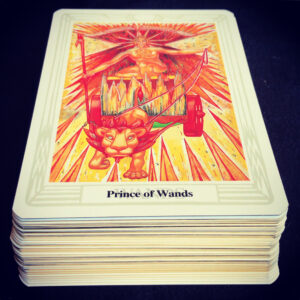 The Prince of Wands represents “air of fire.” We can think of it as the sort of energy of a wildfire in high winds.

Here is part of Crowley’s commentary on the card.

The moral qualities appropriate to this figure are swiftness and strength. But he is sometimes inclined to act on impulse; sometimes easily led by external influences; sometimes, especially in trifles, a prey to indecision. He is often violent, especially in the expression of an opinion, but he does not necessarily hold the opinion about which he is so emphatic. He states a vigorous proposition for the sake of stating it. He is in fact very slow to make up his mind thoroughly on any subject, but always sees both sides of every question.

This card rules the final Decan of Cancer, and the first two of Leo, so there is a combination of spiritual-mindedness, creativity, and an attention-grabbing personality.

I must remember not to be hasty today. 🙂