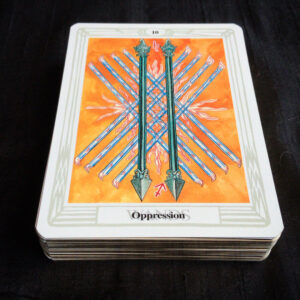 Keep to the Magnum Opus

The Ten of Wands follows yesterday’s Ten of Swords. Both cards are representations of Malkuth, the tenth (and final) sefira on the Tree of Life in their respective worlds (or planes). It is the emanation furthest from the Divine Source, and thus can be thought of as the most degraded, although still containing the trace of holiness.

Wands represents the plane of Atziluth, the first realm – that of spirit or divinity. So we have the last station in the spiritual dimension depicted in this card. The pure energy of the Source has moved through various stages of being reflected and refracted, until it is now a chaotic, albeit still powerful, mess. It is a raging, untended fire.

Here is part of Crowley’s description.

It shows the Force detached from its spiritual sources. It is become a blind Force; so, the most violent form of that particular energy, without any modifying influences. The flames in the back ground of the card have run wild. It is Fire in its most destructive aspect.

The card also represents Saturn in Sagittarius. The swift, bright spiritual energy of the Archer is weighted down and obscured by dense, titanic gravity. Hence the card’s keyword “Oppression.”

There has been a pattern in the cards for me this week, with these two Tens forming the punctuation mark of a warning. The Queen of Wands has turned up repeatedly (fire going wherever it will). The Eight of Swords cautioned against getting blinded and distracted by technique cut off from purpose. Yesterday’s Ten depicted a shattered mindscape. And now this Wands card, showing the destructive and oppressive nature of power divorced from good and just order.

As we delve ever deeper into the spiritual quest, and we glimpse the vast agency which is necessary to progress, temptation and corruption loom. Our explorations must be grounded, deliberate, well tended, and directed toward the Great Work – the work of seeking union with God, and fulfilling the unique purpose which brought us into this life.

Beware the lust of result. Do the work. Tend the fire.