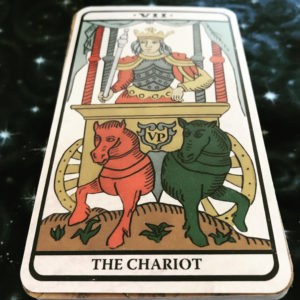 Think about the skill, strength and focus that it would take to control a chariot like the one pictured on the number 7 card of the Major Arcana. When the Chariot turns up, it’s an indication that focused and forcible control is either present or required.

In the Tarot de Marseille version of this card as depicted here, the chariot is conveyed by charging horses, but in Waite’s version, they are Sphinxes, one black, and one white. It’s another of the “acolyte” cards, with a master in the background and two subservients in the foreground.

The ability to control the team, which may have a tendency to pull in different directions if left to their own will, is a key concept for this card. The Charioteer imposes their will, making sure the vehicle moves in the desired direction, and at the right speed.

Sometimes I like to think of the character as taking a victory lap, thundering through the streets with power and skill on display for the throngs to cheer.

This card can represent external or internal control. You could attribute any duality you’d like to the chargers. For instance, if the horses are mind and body, the card represents mastery of self.

When this card turns up for me, I scan around for examples of forced control in myself or my environment, or for situations where it may be needed. Is it time to “whip something into shape” or “force the issue?” Or perhaps I’m pushing too hard on some issue and I need to relax my grip a bit. It’s another of those cards where context and discernment are paramount.

As an interesting side note on this card, you may notice that the version in the photo above has the initials “VP” on the chariot’s shield. These are for “Vincent Pitisci” who created this particular Tarot of Marseille deck. Other card makers over the years have used their initials as well. Waite’s version of the card has a winged shield, with the Lingam and Yoni (symbols of the Hindu deities Shiva and Shakti) on it.

In the historic Nicholas Conver deck, we see the initials “VT” which some have interpreted to mean “Victor Templarius,” a reference to the Knights of Solomon’s Temple. As explained on the Tarot History forums, it is more likely that Conver simply borrowed or “inherited” the image from Veuve Toulon, another cardmaker.

This card turned up for me this morning apropos of a day where I was achieving some things that I’ve been working on for awhile, both in my personal life and on the job. I’ll go take my victory lap now. 🙂