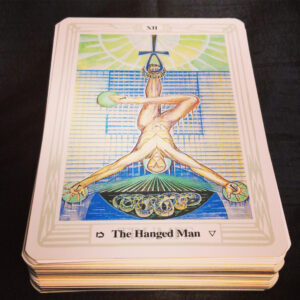 The Hanged Man has always been one of the more enigmatic cards in the deck, and Lady Harris’ depiction of him for the Thoth Tarot adds further layers of enigma. This is entirely appropriate, as Crowley’s ideas about the card are just as elusive.

On the one hand, I think that he may have wished to dispense with the Hanged Man altogether, as a relic of another age. The notion of the light descending into the darkness, the Word made flesh, to become our redeemer, seems almost passé in our age. Self-sacrifice is folly – the endeavor of fools.

In conversation with a friend the other day, I mentioned that the idea of sacrifice is utterly alien and unfitting in this 21st Century. He bristled, and began to cite example after example of individuals who devote their lives to the sacrifice of self in service to others. There are teachers, and health care workers, and so many others. I think he made my point, though. Noble though these efforts may be, and despite their value to our society, they are not valued by our society. Not one little bit. Billionaires are valued. Ruthlessness is valued. Devouring everything in one’s path is valued. Killing in order to get one’s way is virtue.

We like to watch heartwarming stories about a pet who saved a family, or a teacher who gave up a career on Wall Street to help kids with special needs, or a first responder who risked their life to save another. All the while, our refrigerators are filled with animal flesh, our teachers are drowning in student debt and our health care workers are living in poverty and dying from stress related ills while their children go hungry.

So the idea that anyone might give a fat rat’s ass about God dying to save our souls, in this age of darkness, is an absurd travesty.

On the other hand, that paradox is precisely the point of the Hanged Man. In the darkness of evil and delusion and ignorance, a Savior – a Light – descends.

Crowley, characteristically, rejects this notion, saying that the card is a mere cenotaph. But then he adds this little tidbit about the “hope that lies in love.”

The Light only descends to the degree of our willingness to merge with it, to lose ourselves in the marriage, to engage in the endeavor of fools.

Let your light so shine.