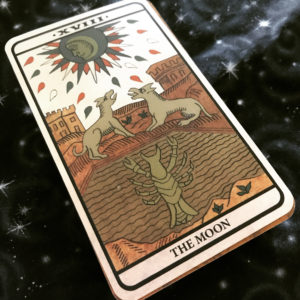 Other than the Sun, the Moon is the most prominent object in our earthly sky. It has influenced human society and culture from our beginnings, forming the basis for our earliest calendars and being associated with numerous deities (both male and female).

There is a mantra that my wife and I have been chanting each day for several weeks now. It’s called the Siri Gaitri, and it is considered to be one of the most powerful of all healing prayers. It begins with an invocation of the Sun (whence comes the energy of our lives), the Moon (receptive energy) and the Earth (grounding and centering energy).

It’s interesting to think of the Moon as a symbol for both receptivity and reflection. Its surface is actually nearly black in color (like asphalt) but it certainly doesn’t appear so when we view it from our planet.

When this card turned up a week and a half ago, I wrote about it representing things that are hidden, and said that its message is to not fear digging deep. Perhaps another message is that we should remain open and receptive to whatever light comes our way, and do our best to reflect it for others.

Tomorrow is a full moon. It’s supposed to be exceptionally bright (the brightest “super moon” of the year). As the first full moon in springtime, it’s known as the “Pink Moon” (in honor of the Moss Pink Phlox which bloom around this time).

If it’s a clear night, my wife and I plan to go outside and bathe in the light.