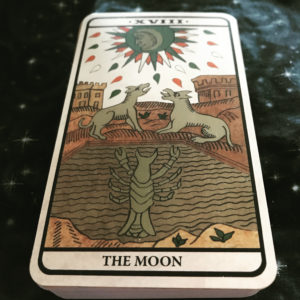 The Moon is the card of things that are lurking under the surface. It refers to deep emotions, buried treasures, hidden strengths, and alternate experiences of reality.

Earth’s moon has long been associated with the feminine, with goddesses, with the rhythms of nature, with cycles and wonders. It has always held a special fascination for me, and has been a talisman in my wife’s and my relationship. When we were living two hours apart from each other, we were comforted by the fact that we could look up and see the same moon. When stricken by misfortune or illness, we have wished on the moon.

In the Moon Tarot card, we see a dog and a wolf howling in the moonlight before two towers which represent civilization. It’s a reminder that underneath the veneer of gentility, there is something primal in each of us. Although we tend to think of wildness as something which must be curtailed or tamed, the Moon card reminds us that it is a wellspring of creativity and strength.

If the Moon card made a mixtape, Mysterious Ways and Wild Thing would have to be included.

The crayfish emerging from the pond is something rising from the unconscious mind. It may be an urge, or a thought, or a memory, but whatever it is, it’s on the verge of becoming available to us.

For me, the message of this card is to not be afraid of what lies beneath. Call it forth. Dig down deep. Expose the riches and marvels there waiting.