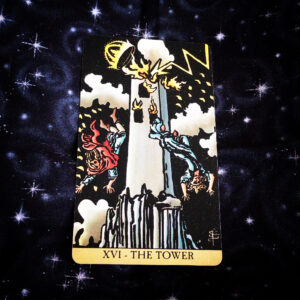 The House of God

In the Tarot de Marseille, card number 16 is called “La Maison Dieu.” The characters on the card who are tumbling from the tower are thought to represent pride and ambition.

In France at the time the cards came to prominence, “House of God” was often used to refer to a hospital or asylum.

The appearance of this card may mean that old structures are falling apart. It can also serve as a warning.

Here is Ben-Dov’s interpretation for the card.

Breaking up of solid structures. Getting free from confinement. Sudden breakthrough after long preparations. Sparkling sexual encounter. Success lies in simplicity and modesty.

I feel that there is something hidden in plain sight.