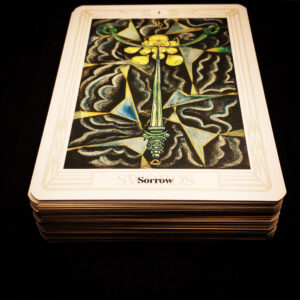 The Three of Swords has long been called the “card of sorrow” and people usually take it as a harbinger of a breakup or painful loss of some kind. I think of this card as a representation of the heart being opened (albeit sometimes painfully) to let the light in.

DuQuette goes into great detail about this card representing a position on the Tree of Life that is “above the void” and as such its meaning is difficult to describe simply in terms that we can understand. He admits that “sorrow” probably makes the most sense, but it is a very specific type of sorrow. It is the “trance of sorrow which led the first Buddha to enlightenment.”

Or perhaps it is the same thing Christians mean when we say that Jesus was a “Man of Sorrows.” This isn’t a mundane expression, like “poor Emo Jesus is so sad all the time.” Such suffering had a depth of meaning for which it is hard to find adequate words.

Tears mark a moment of truth. It’s not the tears that are important, it is that which they mark.