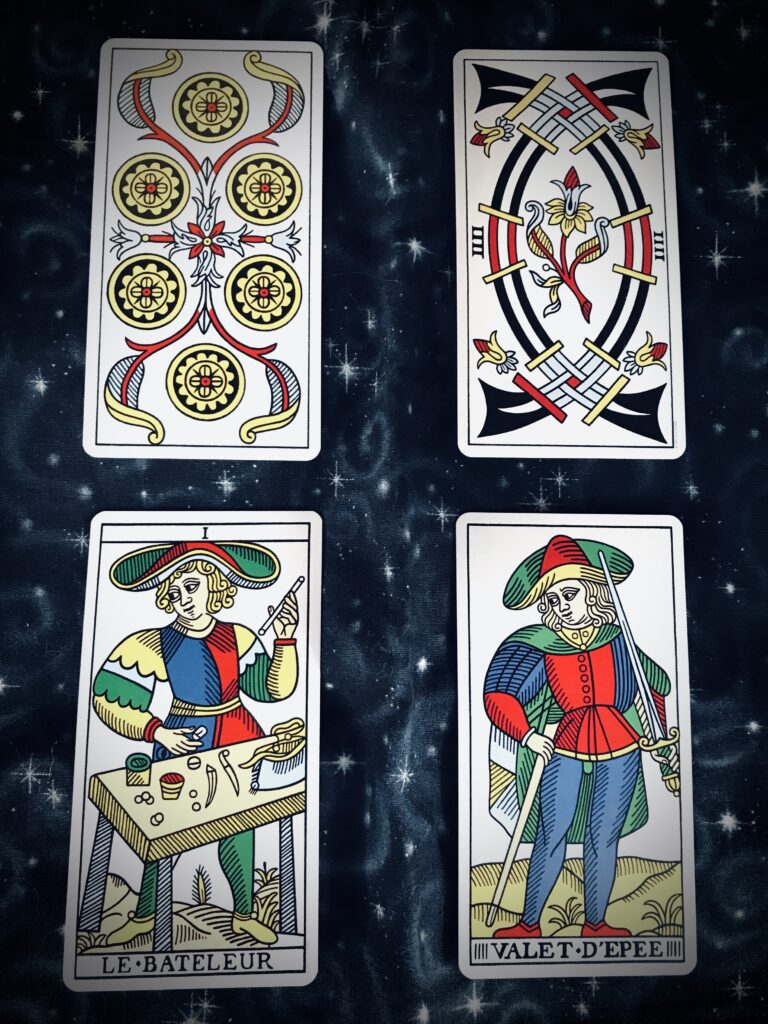 The Magician card represents the use of highly specific skills to bring ideas into material reality. The physical dimension could have to do with health, material comfort, finances, the workplace, physical environment and surroundings or other “practical” matters. The message of the card in this position is either that you already possess the skills which need to be brought to bear, or that you need to develop them yourself or find someone to assist who already possesses them.  In any case, a specific, deep skillset is required, but it is available or attainable.

The Page of Swords represents an eagerness to explore, but also a bit of hesitancy. It can indicate a feeling of being caught between reason and strong desires, and the quest to reconcile or compromise between these conflicting impulses. The figure on the card is a bit off balance. It can also indicate a period of preparation for a challenge to come. In the emotional dimension, the message is to maintain an intrepid spirit, reach out, explore, discover, stay open, but realize that it may feel a little awkward and uncomfortable.

The Six of Coins (Pentacles) represents abundance, plenty enough to share. Ben-Dov describes it thus. “Expansion. Abundance of resources and possible ways to advance. A positive outlook, success. A good balance between stability and movement.”

In the mental dimension, this card says that you have vast resources of knowledge and reasoning at your disposal, and should bring them to bear on the question at hand or issues of the day.

The Four of Swords represents a moment of repose, or possibly restriction. The surrounding limitations of the moment seem solid and insurmountable, so much so that they seem to be permanent. The flower in the center is utterly circled about by the swords – but it is blooming nonetheless.

In the spiritual dimension, this card says to take a breath, don’t force the issue right now, and don’t be frustrated by either your own lack of forward momentum or by the feeling of claustrophobia. Accept this period of rest as a necessary prelude to the inevitable growth and expanded room to maneuver which is to come.

Here are the three things that strike me most when I look at the entire spread.

1) The Page is looking to the Magician, and almost seems to be mirroring or mimicking his posture. From the emotional dimension, you’re taking your queues from the physical/material. It is through skillful means of addressing the material situation that the conflict between reason and desire will be resolved.

2) There is such a sense of mastery and stability in that Six of Coins in the upper left. Invincible stores of knowledge and reason are there as a resource. Abundant blessings of the intellect.

3) That flower trapped between the swords in the upper right really wants to burst forth. Swords are the suit of the intellect. So, it’s almost like there is an overemphasis on analysis or “rational” (as opposed to global, holistic) thinking going on at the moment. Too many lists, too much focus on detail and not enough expansive reasoning which takes into account the long, wide view.

The crux of this spread is the tension in the quadrants on the right. There is a conflict between “heart and head” and there is a sense of being stalled or restrained.

The way forward is patience, keeping the big picture in mind, and reliance on mental prowess and specialized expert skills.