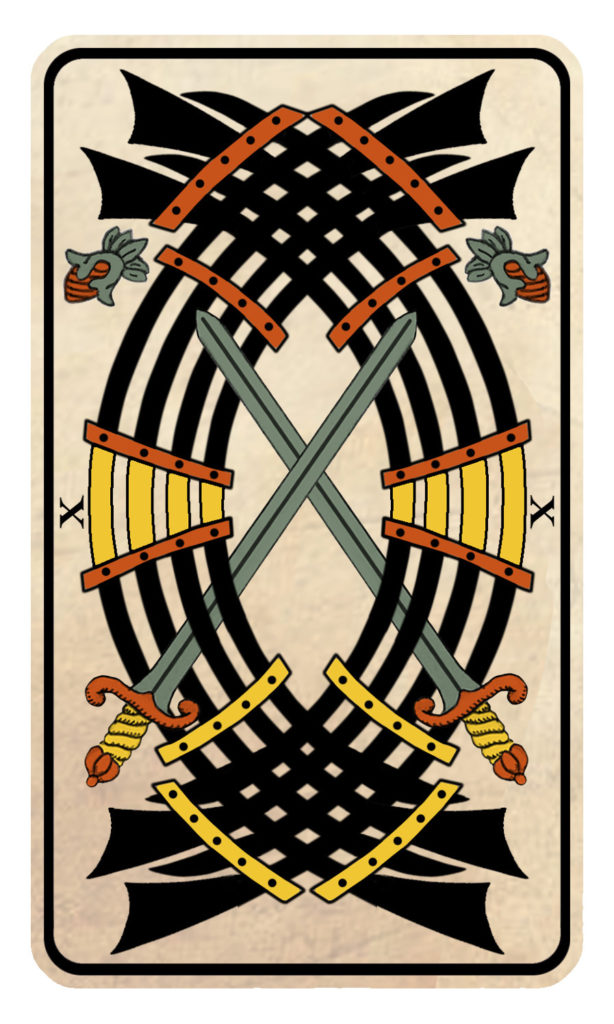 This is my current quick and dirty cheat sheet for the pip cards. Some of the keywords or phrases may make sense only to me. Would love to elaborate on any of these if you leave me a comment or email with questions.

Ace of Wands – spark of the spirit or passion
Two of Wands – no more worlds to conquer, choices
Three of Wands – new venture, visioning, discovery
Four of Wands – celebration, marriage
Five of Wands – contention, contest, fake fighting
Six of Wands – victory
Seven of Wands – balance, whack a mole, besieged
Eight of Wands – flying true, out of my hands, help on the way
Nine of Wands – perseverance, beleaguered, is it over yet?
Ten of Wands – lazy man’s load, overburdened, gather in the harvest

Ace of Cups – keep an open heart, new stirring of emotion
Two of Cups – always follow your heart
Three of Cups – community, sharing, creative collaboration
Four of Cups – ennui, resisting temptation, don’t upset the status quo
Five of Cups – transitions, crying over spilled milk, depression
Six of Cups – happy memories, nostalgia, revisiting the past
Seven of Cups – distraction, temptations, too many choices, misdirection or illusion
Eight of Cups – moving on, recovery
Nine of Cups – sitting in the catbird seat
Ten of Cups – and they all lived happily ever after

The Ten of Swords depicted above is from the Tarot of Marseille by Pitisci ©2019.