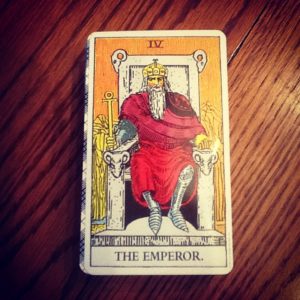 The Number 4 card is about regulation, guidance and organization. Authoritative (not authoritarian) leadership yields order and security.

Look at the sturdiness and permanence of the throne. It reflects the stability of the number four. The Emperor never passes the buck and will never let you down. He assumes responsibility for everyone and everything in his charge. He is pragmatic, steady and maintains standards come what may.

Everything is in its proper place in the Emperor’s realm. His world is run systematically and logically, with defense in depth – his backups to his backups have backups. Every single thing is failsafe, yet nothing under his auspices ever fails.

When this card turns up, it reminds me of my chief responsibility in life – that of a parent. It challenges me to be a more nurturing, protective guardian of my children’s safety, health and happiness.

This card can also be a prompt to get things organized, whether that’s tidying up a physical space, creating a budget or making long term plans to achieve a goal.

The Emperor offers a foundation and structure to the unbridled creativity of the Empress card. He is the rock upon which our fortunes rest.