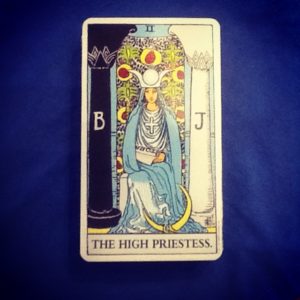 Card Number 2 depicts the High Priestess, on her throne between the pillars of the Temple, guarding the veil of material reality. The Torah (wisdom) rests on her lap, and a crescent moon (intuition) is at her left foot. She wears the colors of purity and healing. Her crown recalls the phases of the moon, and she wears a solar cross.

A friend of mine who has just begun her daily Tarot card journey drew this card on her first day. She commented “I think it means I need to trust my intuition more.” This is precisely the message I get from the card. I hear the High Priestess saying “Listen to the still, small voice within.”

There are more than a few interesting tidbits about this card. The character on the card was commonly thought to portray Pope Joan, an anti-historical figure who would have been widely fabled in Europe during the time that the cards first rose. Before Waite’s revisions, she would have been titled “The Papesse” (and the Hierophant would have been “The Pope”). Even before Waite, some folks apparently had misgivings about these two cards. In the 1800s, a Swiss manufacturer replaced the Papesse and Pope with Juno and Jupiter.

The “B” and “J” on the pillars stand for “Boaz” and “Jachin.” These were the names of ornamental metal pillars which stood on the porch of the Temple that Solomon built in Jerusalem. Note the stark black and white coloration, and how the figure of the High Priestess rests between this duality, creating a sense of unity in their midst. We shall see this sort of imagery throughout the deck (the sphinxes on the Chariot card come to mind). They are shadows and light, opposites, but in balance and inseparable.

The curtain is decorated with pomegranates and palms, ancient symbols of fertility which also echo carvings of a similar nature from Solomon’s Temple. But there is yet another layer of symbolism here. The arrangement of the pomegranates suggest the sacred geometry of the Kabbalah’s Tree of Life. This is another pattern which we shall discover elsewhere in Waite’s deck.

I once drew the Papesse from a Tarot de Marseille deck. At the time, whenever I drew a card that depicted a figure gazing to the side, I would draw another card to see where they were looking. In this instance, I drew the Tower. Here is Pope Joan, on her throne, utterly dispassionate toward the cries and wails and destruction before her. She has no anxiety, because she knows that through tempest and disaster, all is as it should be. All is well.

The High Priestess bids us connect with that part of us which is secure, sure and unchanging. Beyond the veil are the secrets of the soul, and the secrets of the universe, which are true and beautiful and one. Take a breath, and step inside.