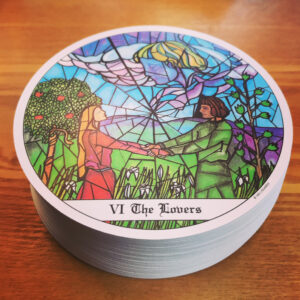 The Lovers is the fifth Major Arcana card which has turned up in the last six days, and the sixth in eight days. The Major cards deal with the longer arc of one’s life, and issues with a bit more gravity than the immediate and temporal.

This card appears, on first glance, to be a fairly simple and straightforward depiction of two lovers, receiving the blessings of an angel at a wedding or handfasting ceremony.

Indeed, the card may sometimes represent just that. Or it may suggest a need to focus attention on a romantic or sexual relationship.

But this card may also be about personal beliefs, moral choices and the like. In the older versions of this card, it was titled “The Lover” and the man was depicted as standing between two women who appear to be vying for his loyalties. Hence the notion of clarifying beliefs and values, or making a choice.

I’m not sure at the moment what, if any, major choices may be facing me in the coming weeks, but if any present themselves, I’ll try to bear the following in mind.

When we make the right choice, it feels as if it has been ordained by heaven.