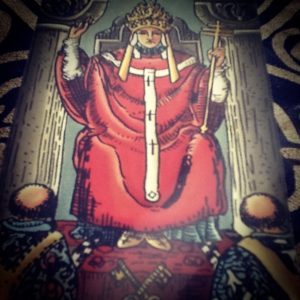 In my introductory Tarot 101 post, I briefly discuss the issue of whether or not Tarot cards are evil or dangerous, and mention that my own church teaches against the use of the cards to “unveil the future.” I think this subject deserves a little more attention. In fact, part of the motivation for developing this website in the first place was a desire to mitigate the notion that the Tarot are “cards of the devil” (hence, the title of the site “Cards of Light“).

I want to reiterate, right at the start here, that I have studied and considered this issue in some depth, and do not believe that the way I use the cards (or recommend their use) is in conflict with Catholic teaching, or is inconsistent with the life of a faithful Roman Catholic or other Christian. In this article, I intend to focus specifically on the formal, authoritative teaching on the matter from the Catholic Church, but I believe that the same principles would apply when addressing the concerns of other Christian Communions, or for that matter, many other religious traditions. I welcome your thoughts and discussion in comments below the article.

First, let’s look at the relevant section from the Catechism of the Catholic Church (Paragraph 2116).

“All forms of divination are to be rejected: recourse to Satan or demons, conjuring up the dead or other practices falsely supposed to “unveil” the future. Consulting horoscopes, astrology, palm reading, interpretation of omens and lots, the phenomena of clairvoyance, and recourse to mediums all conceal a desire for power over time, history, and, in the last analysis, other human beings, as well as a wish to conciliate hidden powers. They contradict the honor, respect, and loving fear that we owe to God alone.”

This comes from the part of the Catechism which focuses on the First Commandment, “You Shall Have No Other Gods Before Me.”

In addition to the Church’s formal pronouncements, there is a long informal tradition which condemns (or at least discourages) such practices as well. Most recently, Pope Francis addressed this issue himself, during his remarks in a general audience on August 1st, 2018.  He spoke about passing a park while walking through Buenos Aires, and spotting pairs of Tarot readers and querents sitting across tables from each other. “Instead of praying to God who is the Providence of the future, they went there to have their fortunes told, to see the future. This is one form of the idolatry of our times. I ask you: how many of you have gone to have your cards read to see the future? How many of you, for example, have gone to have your hands read to see the future instead of praying to the Lord? This is the difference: the Lord is alive. The others are idols, forms of idolatry that are unnecessary.”

The crux of the matter is (as another section of the Catechism puts it) “Idolatry consists in divinizing what is not God.” So if one is placing their faith and trust in cards, astrological charts, interpretation of omens and such in place of their faith and trust in God, that practice would clearly be counter to the teaching of the Catholic Church.

“The Devil’s in the Details”

Pardon the flippant heading there, but I couldn’t resist.

If you study these above proclamations casually, they may seem like a straightforward condemnation of the Tarot. In fact though, one can use the Tarot in ways that do not involve “divination” (making a god of the cards) or other idolatrous activities. I’d like to describe how I use the Tarot, and you can decide for yourself whether you think my method is suspect according to the teachings outlined above.

How I Use the Tarot

I have found the Tarot to be a powerful guide for personal growth and development, an aid to spiritual and psychological healing, a boon to creativity and an excellent tool for problem solving. The way the cards accomplish all of this is simple. They provide access to information that can otherwise be difficult to come by, because it is information which is mostly hidden away from our conscious minds.

By the time we are adults, something like 95% or our mental processes are not conscious. During our formative years we learn how to go about the tasks involved in day-to-day life. We’re able to repeat most of our necessary activities “automatically” without giving much thought to them at all. Think about something as complex as driving an automobile. You have to be able to apply just the right amount of pressure with your foot to either the accelerator or brake pedal to adjust the speed of the vehicle. You have to be able to turn the steering wheel just enough to make a right-angle turn at 15 MPH or a gentle curve at 70. You have to be able to constantly monitor conditions in the path ahead, maintain a safe distance from other moving vehicles and stationary objects alike, and respond instantly to sudden changes (such as an animal or vehicle darting out in front of you). You have to do all of these things, and more, at the same time – and you do it all without even thinking about it.

It’s a good thing that we have the capacity to do so much without consciously thinking about it, because otherwise it would take such tremendous amounts of energy to get through breakfast that we would stand little chance of getting through the rest of the day.

On the other hand, though, there are all sorts of these automatic routines being run by our unconscious mind that aren’t necessarily useful to (or may even be at cross purposes to) our survival, growth and happiness. We’re running these routines without consciously deciding to do so, and we are often not even conscious of a routine’s existence. Some of them may be routines that we chose deliberately at some point based on experience, but some have been placed in our minds by someone else, without our conscious awareness, let alone consent or acceptance, usually when we are very young.

Of course, there is another type of information that can be tucked away in our unconscious minds besides just these “automatic pilot” routines, namely everything we have ever sensed, dreamed, felt, thought or otherwise experienced. What an incredible storehouse of useful information that can be, if only we can bring it up to the level of consciousness.

The Tarot has an uncanny way of helping with all of this. It can make us aware of habitual routines in our lives of which we are not consciously aware, and it can draw thoughts, feelings and ideas to the surface that are buried pretty deeply in the unconscious mind. Some of this information can be of inestimable value when brought to consciousness.

How does that work?

There are lots of different notions concerning how the Tarot brings information to light. Most of the concerns expressed by religious leaders about the cards is that the information provided comes from some nefarious (even demonic) source. Some card readers themselves refer openly to communication with spirit guides or angels or other entities “beyond the veil.” My purpose in this article isn’t to criticize their convictions or to pick a fight about any of that. I’ll simply say that this is not how I believe that the cards work for me, and it’s not an approach that I recommend to anyone else.

In short, I don’t use the Tarot to call forth anything outside the mind of whoever is sitting at the table with the cards before them.

Here’s how I believe that the cards work.

Our minds have an unmatched capacity to create associations and see patterns. When we are presented with a random stimulus, we begin to search for meaning. This is another one of those routines that we run almost constantly without even realizing it. Our minds scan through everything we have ever experienced in an attempt to relate to the stimulus, and to make sense of it. So when we see an evocative image on a Tarot card, it can bring things to the surface that we might never otherwise call to the conscious mind. 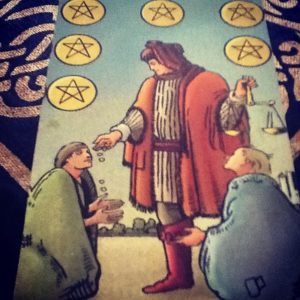 Here’s an example. The Six of Pentacles depicts a person in the guise of a merchant (as Waite describes him) distributing alms to a pair of beggars. The scales in his left hand symbolize justice, perhaps, but also a delicate balance. There is a social dynamic between giver and receiver that might be easily upset. On the surface, the card represents benevolence, but I think that it also represents a basic injustice in the world.

Upon drawing this card once, I realized for the first time that I have a deep ambivalence concerning money. It’s a little more complicated than this, but fundamentally, I have an aversion to material wealth, and disdain toward a lot of people who possess it.

I remembered that my mother used to say “a clean room, baloney sandwiches and lots of love is all anyone needs.” She would also point out on occasion how unhappy wealthy people seemed.

Does this attitude serve me well? I suspect not, though I’m still sorting that out. The point here is that I was never even aware that I owned this attitude until I pulled the card. I couldn’t approach the question of how it might affect my life until it was brought into the realm of my conscious mind.

This is just one example, but it is fairly typical of how I have seen the Tarot work in my own life and in the lives of others.

Does this seem like idolatry to you? It does not, to me.

Although this article has been written specifically to defend my own Tarot practices as consistent with Christian faith and values, I want to acknowledge the broad range of thought and practice when it comes to the Tarot. Many practitioners incorporate their own spiritual and religious traditions into their use of the cards. Among the finest people I’ve encountered who read Tarot are Buddhists and Pagans. There are any number of folks with undeclared or indistinct religious leanings, and lots of people who identify as Christian, but who also believe that the cards work by enabling them to communicate with otherworldly spirits or powers. In fact, if you ask ten different Tarot readers how the cards work, you’re likely to get a dozen different answers. 🙂

I want to emphasize that in defending my own thought and practice, I mean absolutely no disrespect to others, and no condemnation toward them, even if their practices seem to be inconsistent with Catholic teachings described above. It is not my aim to judge, nor to hold up my church’s proclamations as applicable to anyone else.

Also, I want to emphasize again that if you are hesitant or afraid of the Tarot cards, stay away from them. I firmly believe that there is nothing in them to fear (anymore so than any other tool that digs into the unconscious mind), but if you are afraid of them you will be unlikely to reap the benefits anyway.

It’s my sincere conviction that Christians can, in good faith, throw Tarot cards, and the cards can even be used to reignite and deepen one’s Christian faith. As with so much else, a well educated, informed and thoughtful conscience is required.

I’d love to hear your thoughts on the matter.

UPDATE 2 March 2020: I was delighted to see this marvelous Tarot FAQ for Christians from Tiffany Lee Brown, who is a friend of mine from The Well. I especially love her “Bible Rule Exercise” which is useful in relationship to so many situations. 🙂