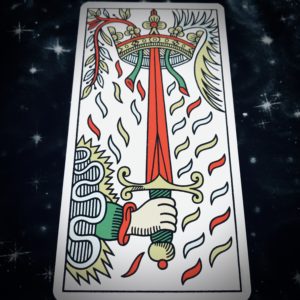 The Ace of Swords represents a flash of insight or reasoning which sets the stage for a positive conclusion. It indicates the feeling you get when spotting the final clue that solves a puzzle, or when “something clicks” and a plan feels right.

When I was managing an organization with an annual budget in the millions of dollars, there would come a point each year where I would realize that no matter what we did for the rest of the year our goals would be achieved and our fiscal performance would finish within tolerances. I called this moment “the unscrewable pooch” (a phrase drawn from The Right Stuff). The knowledge that we were past the point where anything could impair our results in a significant way gave us a lot of freedom to experiment and learn, and also gave us the opportunity to take risks that would further enhance our final outcomes.

The appearance of the Ace of Swords comes as an assurance that the unscrewable pooch has arrived.

This morning, prior to this Ace turning up, I was in the midst of some personal financial planning. I had been weighing the options for a few weeks now, and was hesitant to move forward with a decision. When I reviewed the figures again this morning, one of the options seemed so obviously preferable that for a moment I was concerned that I’d calculated incorrectly. I made the calculations again, reviewed the results and the best decision became instantly clear. Not only that, I realized that the sooner I act on the decision, the more beneficial it would be. The data now seems so compelling and unambiguous that it’s hard to understand how I missed it earlier.

As the hand emerging from the cloud presents the sword as a gift, such moments of clarity may be viewed as moments of grace. I will be thankful, and I shall not squander.