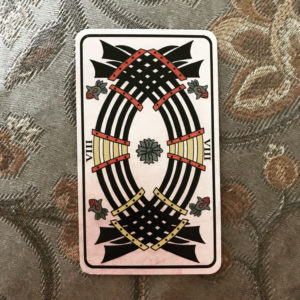 The Eight of Swords, for me, is the card of thoughtful proactivity. Through our tests and trials, we learn to see things as they are and take what actions we can to achieve a desired outcome. This card is about training our minds to see past whatever limitations or lack have presented themselves, and to focus instead on our resources as we move forward out of the darkness and into the light.

Waite’s version depicts a woman wearing a blindfold, bound, and standing in the midst of a circle of swords that have been placed in the ground to resemble the bars of a cage around her. There is clearly a way out, and her bondage appears to be easily loosed. She is isolated and unable to see her true circumstances.

I used to think of this card with the single word “ignorance.” If the character would just shake off the bonds and remove the blindfold, she would be able to see that she’s only two steps from freedom. Indeed, a lot of readers interpret this card as being about self-imposed limitations or boundaries. I’ve even seen it described as being about a “victim mentality.”

Much like the character on the Two of Swords, though, there is more going on here than I understood at first. We can think of the blindfold as relating to an initiation of some sort. If the character on Waite’s Eight of Swords is an initiate, then the card depicts one of the trials of her initiation ritual. She is in this predicament to learn something of value. The bonds, blindfold and faux imprisonment with the swords no longer represent ignorance, but a lesson she must learn in order to proceed.

In systems of interpretation and traditions related to older decks such as the Tarot de Marseille, meanings for this card tend toward this second way of looking at it. It represents a state of meditation, contemplation or concentration during which solutions and paths forward become clear. In this context the blindfold on Waite’s character might represent a refusal to focus attention on restrictions, focusing instead on our own inner resources.

Here’s what Joan Bunning has to say about the Eight of Swords:

In readings, the Eight of Swords is often a sign that you are heading toward (or already in) a situation in which you will feel a lack of freedom and choice. Such situations are tricky because the more you get into them, the more restricted you feel. At each step, your options seem to narrow until you feel completely stuck. When you see this card, remember that you do have choices, and you do have power.

We not only need to “remember” that we have choices and power, we nee to exercise our proactivity in small things at all times, so that it becomes a habit, and is part of the mental programming we bring to challenges small and great.

As we practice a habit of attention where we focus on the choices available to us, rather than the restrictions or limitations we face, our freedom is increased. This seems like a good habit, particularly as we navigate the current global health and economic crisis.