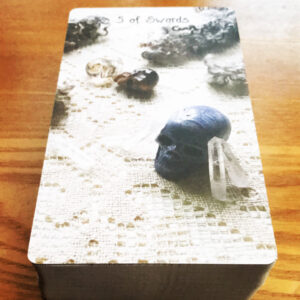 The Winds of Change, They Do Blow

The Five of Swords can be a difficult card to interpret. In Waite’s deck, Pixie depicts victor and vanquished. In this lovely card from the Crystal Skull Tarot, we see the victor in the foreground, having gathered all of the swords after battle, and the two defeated foes (on their ears) in the background.

It has been said that interpretation of the card depends on which of the characters one identifies with. I tend to think of it more as a general reminder that, in this material world, things are always changing. Some days you win, and some days you lose.

Fives represent transitions or changes or instability, and Swords are the suit of the air. So my shortcut definition for the card is “winds of change.”

This card turned up two days ago as well. Time will tell what sort of omen it may be.