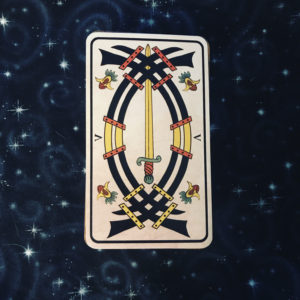 With today’s card we move to the suit of Swords, the realm of the mind, the sky and the air. Since fives can represent change, we could think of this card as “the winds of change.”

This reminded me of the old proverb “it’s an ill wind that blows no good.” Although it’s been given other interpretations over the years, it originally meant simply that changes which are unlucky for one person may be lucky for another.

We can feel the wind, but we can’t see it. We can only see its effects on what it touches. In the same way, we often don’t notice even a substantial or fundamental change in our own lives until it shows up in effects.

I have often referred to the image on the Waite version of this card as “winning ugly.” It depicts a swordsman in the foreground, gathering up swords that have been relinquished by those he defeated, who are walking away. Although their backs are to us, they appear to be not only vanquished, but dejected, while the victor watches them with a smug look on his face. His good luck is their bad luck. But I also get the sense that all of this is temporary, that he will get his just desserts in the long run. The jagged clouds in the sky above indicate that the winds of change have not yet entirely passed. Perhaps that is wishful thinking.

And perhaps I’m projecting too much on to Waite’s Five of Swords. Why do I identify with, and pity, the losers? Maybe they are terrible people, marauders – and the man in the foreground has just saved his family or his village, or some such.

Pitisci has this one as “an opportunity to clear the air” or settle disagreements. His keywords include disruption, opposition and something unexpected.

It is said an Eastern monarch once charged his wise men to invent him a sentence, to be ever in view, and which should be true and appropriate in all times and situations. They presented him the words: “And this, too, shall pass away.” How much it expresses! How chastening in the hour of pride! How consoling in the depths of affliction.

Whether good luck or bad, the Five of Swords comes to remind us that this, too, shall pass.