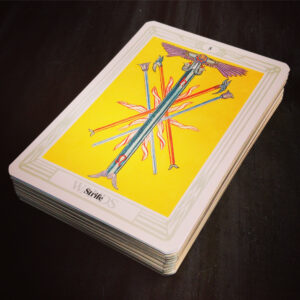 For my first daily draw with a Thoth deck, the Five of Wands turned up.

One of the features of the Thoth deck that is both appealing and daunting is that each of the minor cards has a keyword characterization printed at the bottom. It’s appealing, in that it prompts one toward the meaning of the card quickly, without the need to have recourse to a book or other reference resource. It is daunting too, however, in that it feels a bit like a straight jacket when it comes to interpreting the card.

When this Five of Wands turned up this morning, and I read “Strife,” it felt constricted and unpleasant. I thought of how I might interpret this card in another deck such as the Tarot de Marseilles or RWS. Even though the RWS deck depicts a group of people clashing with their wands, I might speak of it in terms of “disorganized energy” or “play fighting.” But with this Thoth deck, the word is right there, and there is no getting around it.

Things like strife are unpleasant to confront, and I would like to leave myself a way out.

What I finally realized is that there are lots of unpleasant experiences in life itself, not just in a card draw. We face them day by day, often unexpectedly. Strife or other unpleasantness arises, and there we are in the midst of it. We cannot pretend that it is something other than what it is.

Rather than an entirely reactive focus on the unpleasantness and feeling of constriction, though, we do have a choice about how to react in such situations. We can prepare ourselves, though meditation, contemplation, prayer and other practices, to confront strife and other unpleasantness with grace and calm.

After reflecting on all of this, as I looked at the card again and began to imagine strife arising, I considered how I would wish to react – with calm, equanimity, kindness and generosity of spirit. I will not fan the flames of another’s passion. I will not allow my own attention (and therefore, energy) to be drawn into the fight. I will not feed the trolls.

On a technical note, it is interesting to me how Crowley arrives as his keywords for these cards. It is a complex and almost formulaic method having to do with the Kabbalah, astrology, and other systems of special knowledge. In the case of this Five of Wands, the card expresses a powerful fiery energy (Leo) which is being pent up by gravity (Saturn). Hence strife.

I’m very much looking forward to a better understanding of the principles behind the Thoth deck, and to learning what it may teach me in the coming months.