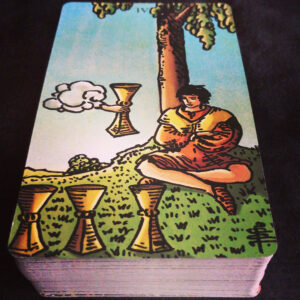 The Four of Cups is the card of emotional stability in the context of our closest relationships. For those of us who have been lucky enough to enjoy the comforts of a loving home, this card represents those comforts.

In the RWS version of the card, the figure sits under a tree, seemingly self-absorbed, almost as if he is rejecting the gift of the cup which appears from the ether, or as if he is unable to even see it.

For a good long while, I thought of this card as representing dissatisfaction or ennui. Here are cups before him, and a cup being offered to him, and he sits there, emotionally distant. He does not appreciate the blessings in his life.

Perhaps, though, he is simply enjoying a state of equanimity. He sits in meditation, cups lined up nice and tidy, more cups on the way. Everything needful has been attended.

When we are centered and self-realized, that emotional stability and comfort is something which can be appreciated, but not grasped at.

It is the grasping which often causes the dissatisfaction. 🙂