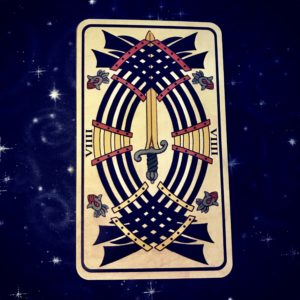 The Nine of Swords is the card of anxiety. In Waite’s deck, it depicts someone in their bed at night with their face in their hands. If you’ve ever awakened in the middle of the night with a sense of dread about your worries and were unable to get back to sleep, you know how this character feels. There is a pervasive, consuming preoccupation of the mind toward a problem or worry or situation that seems hopeless.

No matter how bad things seem, of course, most of the time they are at least a little better in the light of the next day.

Pitisci has the sevens as attainment of some sort. Since the suit of Swords represents the mind, we could see this one as attaining mental clarity. The phrase “it’s time to face the facts” comes to mind.

Our minds may be preoccupied at this time with fears and worries, some legitimate and some not. Some nightmares may be all too real.

Particularly in Waite’s interpretation, this is obviously one of the darker cards in the Tarot deck, yet we need not allow it to engender the dread that it portrays.

Courage. Winning a fight against a superior force. Pure intentions. Putting imperfect means to good use.

As we face uncomfortable facts, let’s do our best to face them with courage and pure intentions. Things will look better when the sun comes up.