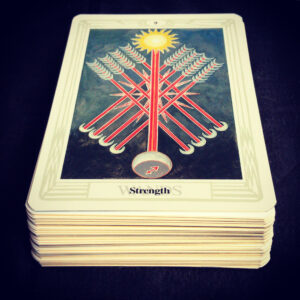 The Nine of Wands, in this Thoth deck, represents the energy of the Moon in Sagittarius. Somewhere in Crowley’s notes he refers to the weakest of the planets in the most elusive house, daring to be titled “Strength.”

It is in motion that this sort of energy finds its strength.

The Nine represents always the fullest development of the Force in its relation with the Forces above it. The Nine may be considered as the best that can be obtained from the type involved, regarded from a practical and material standpoint.

This card is the fifth of the Wands suit to appear in a row, with the Fool card wedged in among them two days ago, and I believe it solves the puzzle, with its simple message “Keep Moving.”