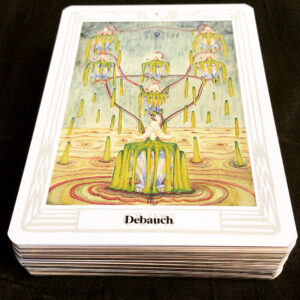 I don’t feel so good.

Venus in Scorpio is just a little too much of a party. She is the planet of copper, representing splendor on the outside and corruption within. Ill-dignified under this sign, we see the corruption all too well.

This card might be titled “sacrament profaned.” We have strayed from the balance, beauty and pleasure of the Six of Cups (Tiferet of Water) to unbalanced debauchery in this Seven (Netzach). The Sefira of Netzach is usually translated “Eternity” but it could just as properly be rendered “beyond limits.”

In the RWS deck, the seven cups are depicted as fantasies of various sorts. I have always thought of the card as representing distractions, and the lure of such.

May we know our limits, and may we keep to them.