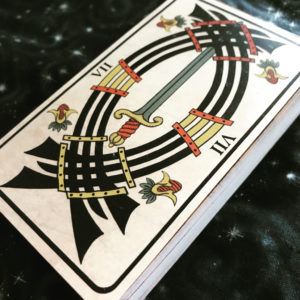 The Seven of Swords is the card of things covert, and someone acting alone.

Sevens represent introspection and inward focus, as well as things not readily apparent (depths to be explored, or things lurking beneath the surface). Swords, of course, are the suit of the mind. So this card can represent something that is escaping our mind’s attention, and it can also represent the independent individual will.

Some readers would use the single word “deception” to describe this card. A.E. Waite’s version depicts a character who is sneaking away from camp with swords he has collected. He is looking over his shoulder to make sure no one has spotted him. When this card turns up, it can indicate that someone is “pulling a fast one.”

Or perhaps there may be an element of self-deception here (things that may be obvious to others, but are hidden from our own consciousness).

The character on Waite’s card is moving from right to left (from the future to the past). Maybe he is stealing from or borrowing against his own future.

This card can also represent taking initiative, individualism, self-reliance and stealth in our actions. It calls to mind the infamous “Rule 303” from Breaker Morant. All the justification you need for doing something is the means and will to do it. Don’t ask for permission.

The Seven of Swords is another great example of the importance of context and intuition to interpretation. When the card turned up for me this morning, my first thought was “something is not as it appears to be.” So I’ll be attentive today to things that I might usually overlook, and keep myself open to surprises. I’ll also be looking for opportunities to dig a little deeper and discover what lies beneath the surface of things.