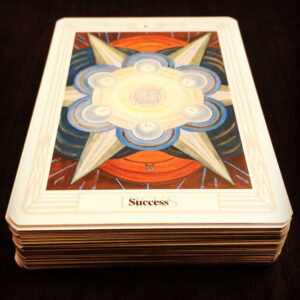 As mentioned Sunday when the Six of Wands turned up, all of the Sixes in the Thoth deck are considered to be auspicious, representing the sixth sefira, Tiferet, and its associations to beauty, balance and integration.

This suit’s Six is the card of the Moon in Taurus, dreams being manifested through productive toil.

The six planets of the ancients revolve around a Rose-Croix sun, forming a hexagon. Each of them has offered an aspect that has contributed to success of the venture.

What is depicted on this card is what people mean when they say “all my stars came together.” It is a precisely balanced confluence of energies expressing as an interlude of success and accomplishment.

So mote it be.