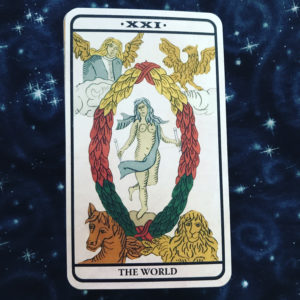 This card has appeared two days in a row, prompting me to bring out my reference books, dig a little deeper, and think a bit more about its meaning in my life just now.

As noted yesterday, this card traditionally represents completion, wholeness and unity. In readings, it indicates the highest level of success, accomplishment and satisfaction – certainly the most welcome card in the deck.

The World card echoes the High Priestess and the Magician, representing the energy of the “inner path” and the skill to channel that energy toward manifestation of our most profound desires.

The figure’s posture on the card is also said to be reminiscent of Shiva, the Lord of the Dance. Esoteric tradition says that the figure is hermaphroditic, the male expression being hidden as an indication that there are mysteries in the card beyond our knowing.

In another one of those odd coincidences that seems significant, I was reading last evening about the “Many-Worlds Interpretation” of Quantum Mechanics. First proposed by Physicist Hugh Everett III in 1957, this interpretation essentially states that all probabilities find expression somewhere. One of the implications of this is that there are parallel realms in which a nearly infinite number of versions of what we perceive as material reality (including ourselves) exist. Within each of these realms, all of the various probabilities interact and play themselves out, becoming manifest, congealing into physical space.

Is this not the mystery of the dance depicted in the World card?

I have come to think that what most of us experience as “the world” is merely the surface expression of energy patterns and movements of which we remain largely unaware. Reality is not behind a veil. It is the veil.

For me, the surface is not enough. I want to understand the meaning of my life. The appearance of the World again this morning is as encouragement to continue delving into the mystery.