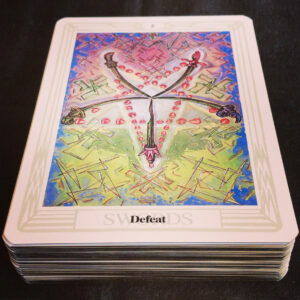 The Five of Swords is one of the most striking of the pip cards in the Thoth deck. Lady Harris’ color palette is beautiful and disturbing. The abstract geometric wing shapes that we see in the background of all of the cards of this suit seem to be spinning, and several of them have recast themselves into swastikas. We also have the image of an inverted pentagram underlying the five swords.

One might imagine that she had the defeat of the Nazis as an intention when painting this image.

Fives represent change – disintegration of the well organized and stable energy of the fours. Swords being the suit of the mind, and of the air, I tend to think of this card as representing “the winds of change.”

In the Thoth deck, this card is Gevurah (God’s wrath) in the realm of air, and Venus in Aquarius. The urge toward love and attraction finds itself in a place of detachment. For Crowley, this combination spelled “defeat.”

This too shall pass.