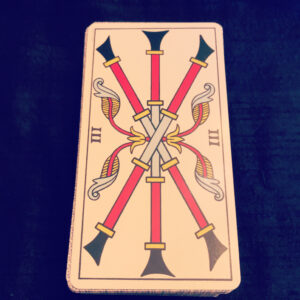 The Three of Wands is the card of discovery, envisioning, new endeavors and creativity in action. Waite’s deck depicts a character who is presumably an entrepreneur, standing on the shore with his three wands staked into the ground, watching three ships which seem to be departing (although they could be arriving, for all I know).

Pitisci has the threes as representing creativity, and wands (as we’ve mentioned) are the suit of passion and the spirit. So this card, for me, is about connecting with the spirit within, connecting with purpose, arriving at a vision of what we want to do, and beginning to put what we have imagined into motion.

Direction. Moving forward after a moment of hesitation. Finding a middle way between two courses of action. Gaining an advantage by keeping neutrality between two conflicting sides.

The Marseilles Deck depiction of this pip card does suggest a path down the middle. The phrase “middle way” reminded me of the Buddhist teaching which calls for rejection of a life which seeks only pleasure, and likewise rejection of asceticism. The middle way is the Noble Eightfold Path of right understanding, right thought, right speech, right action, right livelihood, right effort, right mindfulness and right concentration.

When I began the most recent part of my own personal journey of discovery a year or so ago, I was hoping to find a way out. Through the Tarot, through meditation, through whatever other methods I might stumble upon, I wanted to find a way to overcome the cares and troubles of this world. I wanted my mind to go beyond, or away, or something. I wanted to astral travel. I wanted to achieve a state of bliss, where I would no longer be bound to this world, though I would still be in it.

As it turns out, I think the goal may actually be a lot cooler than that. As Krishna Das says, there’s no place you could ever go where you won’t be. So the trick is to be able to live in this world, here and now. And to find a way to be better. To be kinder, and happier, and have peace of heart.

Escape may be an option. Who knows? But wouldn’t it be something to create lives and communities from which we would not choose to escape even if we had that option?