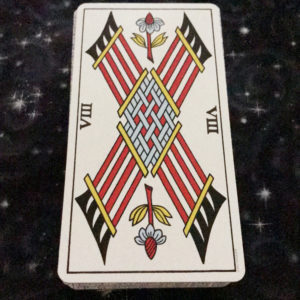 The Eight of Wands represents progress or advancement of some sort.

Ben-Dov has this one as regulation, and advancement being possible only through following the rules. He also has the card as representing a roadblock (which certainly matches the appearance of the TdM version of the card).

Pitisci has all eights as advancement. Since Wands are the suit of the spirit, this could represent progress in spiritual goals, or creative projects.

Waite describes this one as motion. The card in his deck depicts eight wands flying through the air as if toward a target. A message, or help, is on the way. I also usually think of his card as representing forces that have already been set in motion. They are headed on their course and out of our hands.

This is another instance where we have to use context and intuition to determine meaning. It turned up today after the Nine of Wands yesterday (representing perseverance) and the Chariot the day before (representing control and self-mastery). So for me, at this time, it’s an indication that I should pay attention to details. Dot every “i” and cross every “t” at the moment, but keep an eye on the big picture and have faith that everything else is proceeding as it should.